The Reality TV Series with a New Reality for Cancer Treatment

Fact: 1 in 5 men and 1 in 6 women will develop cancer at some point in their lifetime.

At that rate, isn’t it astounding that we still don’t have a clear picture of what healing from cancer really entails?

The emotional decisions, the lifestyle changes, the treatment options. These are the true realities of cancer healing that no one really talks about… until now.

Award-winning Director Charles Mattocks, Executive Producer Matthew Knowles, and Chief Medical Officer Dr. Antonio Jimenez, of Hope4Cancer Treatment Centers, have teamed up to change the way we understand cancer with a new reality TV series that gives viewers an inside look at what healing from disease is really like.

Following the lives of five real cancer patients and the experts that guide them to health, Eight Days is the second season of Mattocks’ groundbreaking television series, Reversed. Coming from five vastly different backgrounds and living with various stages of cancer, each patient shares their healing journey as it unfolds in real time at Hope4Cancer Treatment Centers in Cancun, Mexico.


“A show, unlike anything that’s been seen before.”
— Dr. Antonio Jimenez

As these five individuals pursue alternative healing paths, Eight Days investigates the science behind integrative cancer treatment and educates viewers on practical disease management, including how to: A solo mother from Australia’s Gold Coast, Kate Malvenan is determined to beat cancer for her 3-year-old daughter, Annabelle. At the time of her original diagnosis, Kate was given only six months to live, with the cancer spread all throughout her spine, hips, ribs, shoulder, and liver. Refusing to give up, she arrives on Eight Days ready to embrace change with the spirit of a warrior and the strength of a mother.

“If I wasn’t a mom, I think I would have taken the diagnosis and just handled it gracefully. But being a parent, I’ve taken the gloves off and I’m ready to fight this.” 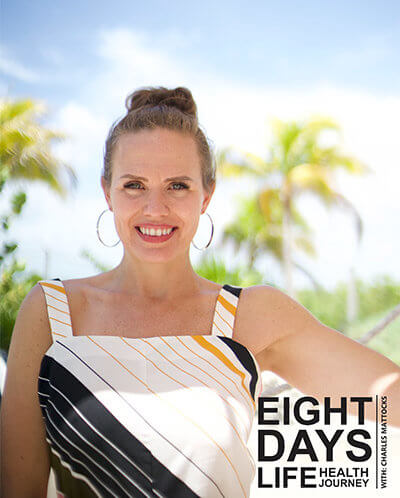 As an active, health-conscious individual, Carrie Crary was shocked to receive her original diagnosis, and even more shocked to find her cancer had metastasized five years later. A registered nurse from Arizona, Carrie’s in-depth understanding of health and the process of traditional treatment protocols made her rethink the path she pursued for healing. Fighting breast cancer for the second time, she is determined to use therapies that support the immune system, rather than ones that force her to constantly fight for her life. Loving husband and father of five from Nicaragua, Jose Fernandez found himself facing the incomprehensible news of a cancer diagnosis on Valentine’s Day in 2018. Uncertain how to continue fighting the disease after 16 months, Jose turned to his faith in Jesus for guidance and clarity. Accompanied on Eight Days by his wife, Caroline, Jose is ready to face the disease that affects 1 in 9 men worldwide with unshakable confidence and an inspiring sense of trust.

“This journey has been a godsend. I had been asking what to do next… When I got the call for 8 Days, I knew God was answering.” Since the first day of her diagnosis in early 2017, Janine Jannicelli’s goal was to utilize only non-toxic therapies throughout treatment. Developing her own treatment plan primarily focused on diet, exercise, and home remedies, Janine was able to improve her health and quality of life for almost two years, until a recent ultrasound revealed the cancer growing again. Continuing on her journey for holistic healing, Janine joins the Eight Days cast hoping to integrate new knowledge and non-toxic treatments with her already-established protocols.

A single mother from Illinois, Nicole Randle has been fighting ovarian cancer with chemotherapy and traditional treatment since 2014. After receiving the news of her cancer’s recurrence four years later, Nicole realized that in order to heal, she would also need to make some serious life changes. Ready to learn and embrace better habits to ensure a better life for herself and her 8-year-old son, Nicole starts her new chapter of health and healing on Eight Days with and open heart and fierce dedication.

“I know without a shadow of a doubt, God has not brought me this far to leave me. This is just another opportunity to bring me to a better place in life. ” Celebrity chef, award-winning film producer, best-selling author, and international diabetes advocate, Charles Mattocks lends both expertise and personal experience as the director and host of Eight Days. After overcoming his own trials with Type II diabetes, Mattocks developed and produced the groundbreaking reality show, Reversed, as a tool to educate and inspire the millions of people struggling with disease. Since the unfortunate loss of his father to lung cancer, Mattocks has expanded his mission to help those suffering from cancer, and shed light on the options patients have for treatment and healing. After witnessing his father suffer through the side effects of conventional cancer treatment, Dr. Antonio Jimenez, M.D. N.D., dedicated his life to researching non-toxic options to heal disease. Founder and Chief Medical Officer of Hope4Cancer Treatment Centers, Dr. Jimenez has since pioneered the center’s holistic treatment program known as the 7 Key Principles of Cancer Therapy, and has helped guide thousands of patients to healing since 2000. An accomplished speaker, he is an honored recipient of The Truth About Cancer’s Lifetime Achievement Award, and has been a featured expert in medical conventions around the globe.

A loving wife and mother of six, Marcy Jimenez overcame her own battle with cancer when her daughter was diagnosed with leukemia at a young age. As one of the original Hope4Cancer patients, the success that Whitney experienced with the center’s innovative, holistic treatments would change both of the mother-daughter duo’s lives forever. As Whitney healed and enjoyed a life free of disease, Marcy went on to become the CEO for 19, and is now serving as Chief Experience Officer of Hope4Cancer Treatment Centers, helping guide and support patients throughout their journey. A nurturing and knowledgeable figure, Marcy acts as house mentor on Eight Days. An expert in psychotherapeutics, Dr. Daniela Colin Ruiz, M.D., obtained her degree in Gestalt Therapy from Integro Guadalajara and joined the Hope4Cancer team in 2015 as an integrative medicine practitioner and emotional healing therapist. As the daughter of a parent with frequent heart complications, she realized from an early age that diseases have both emotional and physical causes. At Hope4Cancer Treatment Centers, she utilizes her deep working knowledge of these components to help patients address the roots of illness and release inner conflicts. A dedicated nutritionist with additional expertise in acupuncture and injury rehabilitation, Oscar Puig uses his wealth of knowledge to oversee the nutritional program at Hope4Cancer Treatment Centers. An essential part of the healing process, the hospital menu is crafted by Oscar to ensure the highest quality dietary standards. One-on-one with patients, Oscar also provides important metabolic diagnostics, personalized dietary plans, and educational material regarding nutrition and health. Holding medical and pediatric degrees and experienced in integrative energy medicine, Dr. Leslie Gomez, M.D., established her own innovative practice using homeopathy to release maternal trauma and effectively heal sick children in 2003. Today, Dr. Gomez draws on her experience working with the physical, emotional, and spiritual body to lead the Behavioral Emotional Spiritual Therapy (BEST) Program for Hope4Cancer Treatment Centers. With her skilled understanding of the connection between organs and emotions, Dr. Gomez gives patients the tools to heal from negative emotions and trauma. Known nationwide as America’s Health Coach, Dr. Asa Andrew hosts one of the fastest-growing radio and television programs in North America. International best-selling author of Empowering Your Health, Asa is a renowned health and lifestyle strategist, and the nation’s leading voice for health psychology. Founder of Diagnosis HOPE, a non-profit organization that encourages lifestyle, health, and wellness education to individuals and communities, his mission is to empower people to attain and maintain an extraordinary life. More recently, he has dedicated himself to full-time educational media, creating the Dr Asa Network, the world’s leading digital health platform. A former US Army Special Ops soldier turned motivational speaker, Rodolfo Young uses more than a decade of education, 21+ certifications, and hundreds of successful client experiences to offer breakthrough coaching for a wide range of personal development. Utilizing tools such as breathwork and neuro-linguistic programming (NLP) in his in-depth workshops, Rodolfo helps people from all walks of life release repressed emotion and learn how to effectively communicate, connect, and create with clarity, integrity, and power. Author of six internationally sold books, he has been featured alongside many of today’s top thought leaders in both business and personal development.

Co-founder and Executive Chef of Planet Vegan Mexico, Chef Miguel Bautista is dedicated to teaching courses, classes, workshops, and consultancies related to veganism and raw foods. In 2010, Miguel brought his expertise to a camp for terminally ill children in Ribera, New Mexico, where he used his knowledge of gluten-free food and food preparation to help prevent cancer and other diseases. Since then, he has continued to spread the benefits of vegan philosophy, superfoods, and Ayurvedic products, earning the title of “Best Chef for Healthy Food in Mexico” at the Bien Fest 2018 Awards.

Since opening their doors in 2000, Hope4Cancer Treatment Centers™ have offered patients a holistic healing program that encompasses the mind, body, and spirit. By combining advanced non-toxic technology with the highest level of patient care, Hope4Cancer’s integrative approach addresses the unique needs of each individual to improve overall health and quality of life. An intimate team of 200+ doctors, specialists, and staff uphold the company foundation of faith, hope, love, and generosity, aiming to educate and empower all lives affected by cancer. 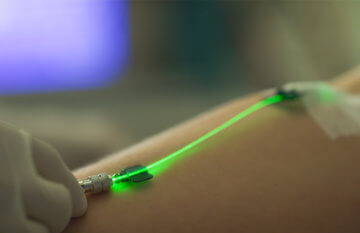 We believe that true healing requires more than just suppressing physical symptoms. That’s why our whole-body philosophy addresses each individual’s mind, body, and spirit, offering a comprehensive healing protocol that will empower you to continue leading a healthy lifestyle at home. 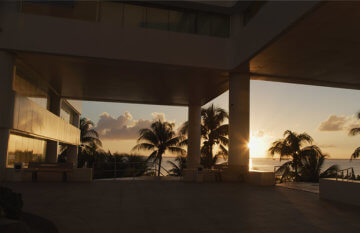 Our Hope4Cancer centers are more than just treatment facilities; offering a refreshingly unique healing experience, they are a comfortable home away from home on your journey to defeating cancer. Our Cancun, Mexico location overlooks a tropical lagoon and the Caribbean sea, while our Baja, Mexico location is just minutes from San Diego on the Pacific coast. Both offer the highest level of comprehensive cancer care. Concerned about travel safety? Learn more here