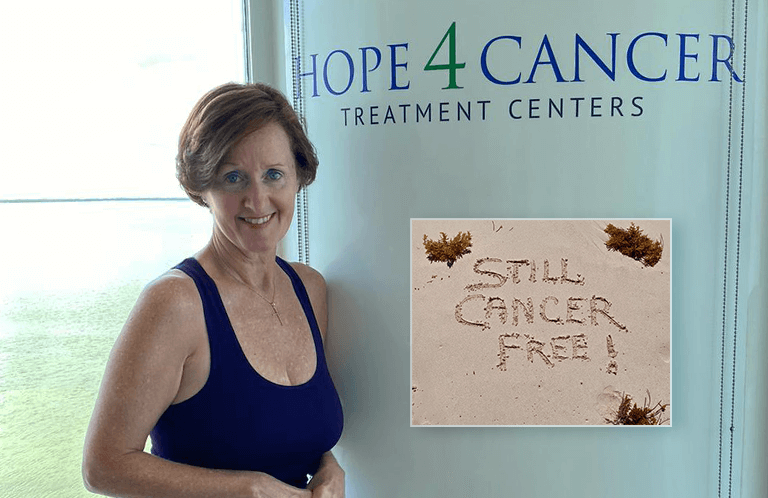 One year after traveling to Cancun for treatment and filming of the world’s first cancer reality TV show, Eight Days, Janine Jannicelli attends her second Hope4Cancer follow-up visit and recalls the incredible details of her journey to healing from breast cancer.

In May 2017, the unsettling news of a stage 1 breast cancer diagnosis left Janine completely stunned. As someone who regularly tried to keep up with health and wellness, the diagnosis was such a shock that Janine hardly remembers her involvement in the whirlwind that followed. Almost immediately, her doctor had her scheduled for a double mastectomy, followed by both chemotherapy and radiation.

But after returning home and sharing the news with some colleagues, Janine felt urged to look for a second opinion and began seeking out holistic therapies on her own, slowly piecing together her own treatment plan. For a couple of years, her research and efforts seemed to keep the disease at bay — but unfortunately, the treatment puzzle was still missing some essential pieces. In June 2019, a routine ultrasound revealed that the cancer had spread to Janine’s lymph nodes, and she knew she needed to act fast.

Less than two months later, Janine arrived in Cancun to begin her treatment journey as a Hope4Cancer patient and participant in Eight Days, Season 2.

“At first, I was apprehensive. I didn’t know what it would entail… I was traveling alone to Mexico, barely spoke Spanish, and had some crazy illusions imagining what would be going on. I also thought I was coming to a normal clinic where people just do their jobs and you’re just another one of many patients — I was afraid that treatments would be difficult and I would just be sitting alone in my hotel room. But from my first moment in the clinic, I was just blown away.”

From the warm hugs she received daily from staff, to the variety of non-toxic treatments she received, the next three weeks left Janine completely in awe of what was possible for cancer patients. And more importantly, it left her with NO EVIDENCE OF DISEASE in just 21 days! Now over a year later and still NED, Janine shares all the details of her incredible survivor story.

Watch Janine’s full testimony below to hear how she overcame a problematic sugar addiction, the therapies she believes were most important for her full recovery, and why she wishes all patients should be more proactive in their journey to healing!

You can watch Janine and the other participants in Eight Days, Season 2 here, for free!

If you or someone you love has been struggling with a cancer diagnosis or is feeling pressured to pursue a treatment path that doesn’t resonate, we want you to know there are other options. Reach out to our admissions department and schedule a free consultation today to learn how we can help.