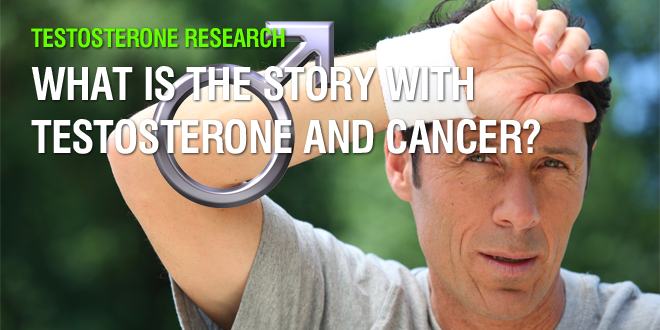 In recent years, a large amount of research has focused on the link between high testosterone levels and cancer risks. The hormone testosterone plays multiple roles in the normal development of the human male, and in relation to prostate cancer, has an important influence on the regulation of the prostate gland. Several research studies have stated that high levels of testosterone may be directly responsible for an increased risk of developing prostate cancer.

The Testosterone and Cancer Link

While low testosterone (or “low T” as it is called) has been a hot topic with pharmaceutical companies who have increased their advertising hype and seen 3-fold growth in testosterone sales, our concern really lies in the connection between testosterone levels and prostate cancer induction.

A recent Australian study has stated that the risk of prostate cancer is higher in older men, specifically men over 70, and with testosterone levels that were higher than normal.  However, other studies have contradicted these claims, or at the very least stated that much more conclusive findings were needed to more accurately determine the cause and effect relationship between high testosterone and cancer.

In probably one of the most quantifiable studies to date, a study of 786 men showed that men who used testosterone replacement therapy were at no greater risk for development of prostate cancer than men who were not on the therapy.

In relation to this study, Michael L. Eisenberg, MD of Baylor College of Medicine stated, “Given that some cancers are androgen dependent, there is concern that testosterone replacement therapy will increase a man’s risk of developing cancer. To date there are no long term, prospective studies which evaluate the incidence of cancer in men on testosterone supplementation.”  In that regard, this study could be considered a landmark study that will open the field to similar introspective studies.

Additionally, critics stated that while the study and results accounted for other criteria, such as smoking, there are still many other factors that might have contributed to the higher risks. Founder of Men’s Health Boston Abraham Morgentaler said that, “The study did not include information about the men’s frequency of prostate cancer screening. Doctors tend not to screen or perform biopsies on men who are predicted to have less than 10 years to live, and therefore they do not pick up prostate cancer in these men. In contrast, doctors tend to screen healthier men with higher testosterone levels.”

In an arena where conflicting reports are rampant, Dr. Antonio Jimenez, M.D. of Hope4Cancer Treatment Centers states, ”There are a lot of articles out there which propose that increased testosterone levels may exert an impact on cancer similar to the way an imbalance in female hormones, estrogen and progesterone, can cause different types of cancer. Our clinical experience has shown that increasing testosterone levels does not increase the incidence of prostate cancer, and this study confirms our long-term observations.”

Jimenez went on to say, “Lowered testosterone levels, on the other hand, are associated with accelerated aging, and is part of an overall slowing down of the body’s metabolism.  It coincides with the emergence of chronic diseases, including cancer. Maintaining optimal levels of testosterone in men may be an important step to prevent the onset of chronic disease and promoting sustained quality of life.  However, if someone does undertake testosterone supplementation, they must exercise caution and seek medical supervision.”

“This article reflects the opinions of the author and those of any of the source articles and should not be misconstrued as medical advice.  None of this information is evaluated by the Food and Drug Administration, and is not meant to diagnose, treat, prevent or cure any disease.”