Charles Daniel is a Hope4Cancer Hero.  In 2007, Charles was among 70,000 people who  were diagnosed with bladder cancer that year.  He was told that by getting his bladder and surrounding lymph nodes removed and bladder reconstructed his chance of survival would be a healthy 90%. Who wouldn’t take that option?  Charles did. 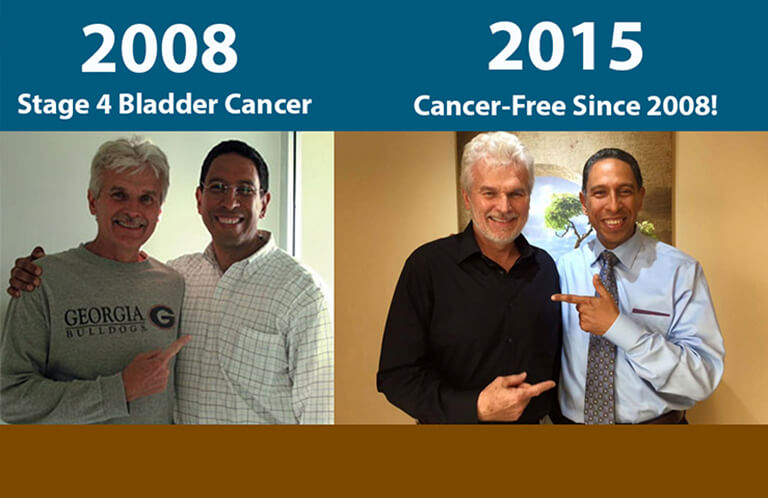 Who Is A Hero?

A brave person is not one who does not feel afraid,
but one who conquers that fear through his or her actions.
A brave person is a reflection of belief turned into faith,
empowered by the knowledge
that the path he or she has chosen is, indeed, the right one.

Unfortunately, as revealed by the post-surgical analysis, the cancer was found to have affected the lymph nodes, which statistically dropped his chances of survival to 40%. Despite ensuing aggressive chemotherapy, the metastatic cancer soon reached the liver.  At this point Charles was given between 4 to a maximum of 12 months to live. A healthy man, who had just spotted some blood in his urine a few months ago and thought it was an infection, was condemned to die. Charles is eternally grateful to the surgeon and doctors who treated him during that phase of his life, but he knew he had to do something else.

With a young daughter to raise and put through college and his loving wife Sandi a huge part of his life, Daniel had a lot to live for.  He wasn’t willing to give up, and with Sandi as his silent (as she calls herself!) yet strong partner by his side, he found Hope4Cancer Treatment Centers through a “long-shot” referral of one of his doctors.

Daniel spoke with Dr. Antonio Jimenez, Hope4Cancer’s Medical Director.  Eight years after that conversation, Charles recalls is as clear as it was yesterday. Dr. Jimenez said, “Charles, if you come to Hope4Cancer, you will not die of cancer.” Encouraged by what he had heard about Dr. Jimenez’s success with removing cancer from the liver, Charles was willing to give this a shot – which he knew, would be his last one. Watch the video to hear the rest of his amazing journey.

Seven years later, in June 2015, Charles traveled to Hope4Cancer Treatment Centers in response to his doctor’s invitation to be interviewed by Ty Bollinger for the “Global Quest for the Cures” series to be aired in October 2015.  Charles also participated in a lively and emotional round table with Ty and other current and ex-Hope4Cancer patients.

Today Charles lives a healthy, carefree life. We should use the word carefree carefully, of course. Charles takes good care of himself, never straying from the principles of health and nutrition he learned at Hope4Cancer.  He knows what he could have lost and his gratitude does not allow him to stray from the path that gave him back his life and family.

A Portrait of True Victory

You could see the glimmer in Charles’ eye as he talked about his daughter’s graduation. His wife looked at him thankfully as she alternated from a smile on her face and tears of gratitude in her eyes – knowing so well that Charles could have been taken away from her, just in the blink of an eye.

It is a moment of truth that hundreds of thousands of families endure every year.  Most of them never make it to Hope4Cancer.  And, for most of them, it doesn’t end in Charles and Sandi’s happily-ever-after either.  It is sad, but it should not be a surprise.  Most conventional treatments progressively destroy the very vehicle that carries us around – our bodies.  Most patients die either from the side effects of conventional treatments (radiation and chemotherapy). If not that, the cancer simply comes back, born of stem cells that are more resistant and more aggressive than the original cancer cells.

Yes, Charles’ courageous choice ensured that he wasn’t consumed by the dire statistics of Stage 4 bladder cancer. However, we are committed to helping the world understand that Charles “courageous” choice was also the “logical” choice – the right choice for treating cancer.

The before-and-after picture shown above, taken 7 years apart,  is an iconic portrait of the work done at Hope4Cancer in helping people heal with non-toxic therapies and with an emphasis on high quality of life throughout the process.Dr. Jimenez acknowledges that Charles has been one of the most disciplined patients he has had, and the results show.  Also pictured is Charles and Sandi Daniel with Ty Bollinger after their interview with his team (to be coming soon in the next Quest for the Cures!).

Charles and Sandi, you have been our ambassadors for many years, and we salute you today as Hope4Cancer Heroes!


If you or someone you love has been struggling with a cancer diagnosis or is feeling pressured to pursue treatment that doesn’t resonate with you, we want you to know there are other options. Reach out to our admissions department and schedule a free consultation today to learn how we can help.