Aaron Robinson was given only 15 months to live after the doctors discovered two massive tumors on his brain. His loving wife, Jennifer, recounts the events leading up to his diagnosis and their experiences at Hope4Cancer. 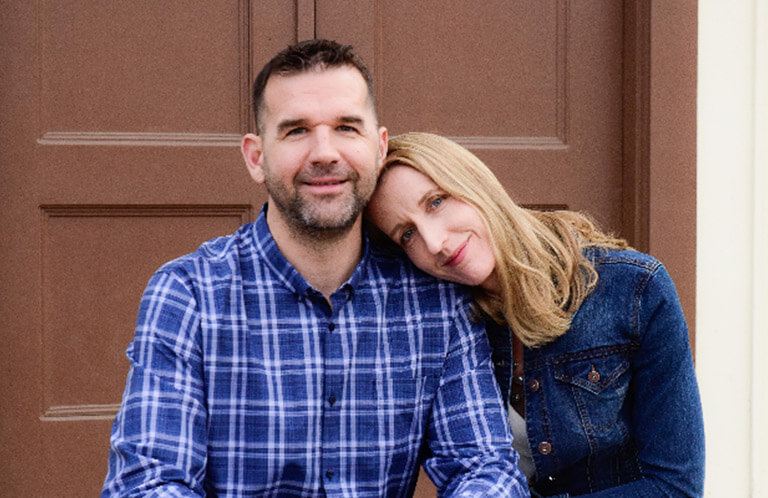 It was December 30, 2015. I was in the office at the shop Aaron and I run together, when some visiting friends frantically rushed in: “Your husband is having a seizure!”

I was stunned. Nothing like this had ever happened before. Aaron had been having progressive neurological symptoms for a few months, but we figured it was due to the toxic metal exposure we had already changed at work. We had started him on a detox program and he began feeling better, yet there he was – banged up from falling and seizing on the cement floor.

I had to sit on him to so that he wouldn’t hurt himself more, and dialed 911. The seizure lasted for six minutes; the ambulance was there in a few. Six men loaded him into the ambulance, and it wasn’t until we reached the hospital that he finally began to come to – he was unconsciousness for 30 minutes.

Exhausted, we waited in the emergency room for 13 hours, through numerous tests and scans. It was revealed that Aaron had two golf-ball sized masses on the left frontal and left parietal lobes of his brain. They were so large, his whole brain had shifted to the right. A biopsy had to be done to be sure what it was, so he was admitted overnight and scheduled for an 8am surgery the following morning – New Year’s Eve.

On a day when the entire world was celebrating a New Year, we were pleading just to get another one.

I went home to make sure our kids were okay, and tried to get a few hours of rest. When I re-joined Aaron before the operation, we were terrified. We had no idea if he’d make it out of surgery. We talked about everything we were sorry for in our relationship – forgave each other, and prayed that we’d see each other again. We encouraged one another that no matter what happened, we were thankful for all our time together, and that we’d do it all again if given the option. I stayed with him for as long as I could, and then went home to try and rest again during the procedure.

I slept fitfully. I screamed. I cried. I yelled into my pillow, “Why us? We’re barely 40. We have 2 young kids, and a lot of life left to live!”

A voice, small but clear, spoke to me: “Ask me for a Miracle.”

“A miracle? That is against all odds and human knowledge,” I thought.

“I am not bound by human knowledge. Ask me for a Miracle.” the voice affirmed.

The phone rang. A nurse was calling to let me know the procedure was almost done. I anxiously returned to the hospital’s OR waiting room, and after what seemed like an eternity, two neurosurgeons approached me and asked to speak in the hall. It felt like something straight from the movies. There I was standing in a hospital hallway, talking to men in white coats. It took me a while to process the conversation.

“Stage 4 Glioblastoma Multiforme. A very malignant brain cancer. Medically speaking, there is no cure. We’ll need to do surgery to resect the tumor, followed by treatment rounds. Median survival is 12-15 months. Without treatment, he’ll only have 3-6 months. We can try a couple of clinical trials and maybe extend his life a few more years.”

I was in shock, trying to scribble down notes on one of the doctors’ business cards in a sleep-deprived daze. The more these men told me, the more it seemed we were facing an undefeatable monster. Because GBM is a cancer of the glial cells, there was 100% certainty that other spots in the brain were affected, but not yet showing. (As we later discovered,) Brain radiation wasn’t an option, as it’s a high risk factor for GBM. The standard cytotoxic medicine, Temodar, led to additional cancers. No matter what we did, it was likely that the cancer would recur.

“Okay Lord, I trust You. I will ask for a miracle, even if I don’t understand how.”

Family flew in to support us as we focused on saving Aaron’s life. Our church family rallied around us, bathing us in the Word and prayers, and set up a couple of meal trains. A Prayer Warrior Team was recruited for us – prayers and encouragement came in from all over the planet. The number one prayer request was for a Miracle: complete healing for Aaron. We began to pray boldly.

The surgery alone was risky. The goal was to maximize resection, while minimizing loss of function. There was a chance Aaron could lose function where the tumors were – in the communication and movement areas of the brain. We made videos of Aaron telling our kids how much he loved them, just in case he wouldn’t have the opportunity to say it again.

An awake craniotomy was performed by a team of six doctors (two neurosurgeons, two anesthesiologists, and two neuropsychologists), plus nursing staff. The left portion of Aaron’s skull above the ear was removed and replaced. Halfway through the operation, the doctors woke him up to test the surgery in the speech area.

Praise God, the surgery went well! The medical team was able to remove almost all of the tumor in the frontal lobe, and about 90% of the tumor in the parietal lobe. The recovery was pretty brutal. I went on many prayer walks – thankful for Aaron’s miraculous healing, and for my brothers and sisters in Christ who joined in, to help me heal my husband.

After the operation, we told Aaron’s neuro-oncologist that we did not want to pursue any additional conventional cancer treatments. We knew that Aaron was already toxic before the diagnosis. We wanted to heal what was wrong by removing toxins – not pile on more chemicals to try and nuke a symptom. He advised against holistic alternatives, but thankfully continued to work with us. Based on Aaron’s post-surgery scan, he was assured that we had a good “window” of time to try alternative treatment.

I spent multiple weeks researching every treatment option we could find. It wasn’t too hard; there are very few “approved” options for GBM available in the United States. We realized that we’d have to travel out of the country for our best options. We didn’t want to travel too far because of our kids and family, so we narrowed our search down to clinics in North America.

Thanks to the recommendation of a friend from church, we watched “The Truth About Cancer” video series right after Aaron’s diagnosis – this is how we heard about

Aaron felt early on that he was supposed to go to this clinic – to be under the care of Dr. Tony Jimenez and his team, but I still wanted to research as many treatments and doctors as I could. It was a large faith step for us to commit to healing non-conventionally. These clinics and therapies aren’t covered by insurance, so in addition to taking more time off work, we needed to have a large cash deposit to be able to check in.

Through another series of miraculous events, the Lord came through and provided the entire amount needed for Aaron and I to check into a 3-week stay at Hope4Cancer. Within a few days, we knew we were right where the Lord wanted us. Upon arrival we began to meet kind, knowledgeable doctors, and other patients who were walking miracles. Over the course of our stay, we saw a little improvement in each patient every day – a little more energy, a bit of weight gain, a bigger smile. We were able to draw wisdom, discernment, and courage from each other, sharing stories of where we were from, how we got there, and who was supporting us.

It was amazing that beating cancer brought us all together. Caregivers, companions, and fellow patients began to feel like family.

The clinic itself was efficiently run as a tight ship – Aaron’s therapies began on day one utilizing non-toxic therapies that selectively kill cancer cells and are effective at crossing the Blood Brain Barrier. (One of the reasons why brain tumors are difficult to treat). A mix of other treatments, from nutrition programs to BEST Healing program, were included to address all aspects of well-being. This was one of the top reasons we chose Hope4Cancer; to restore Aaron’s physical, emotional, and spiritual health. Beyond Healing, the Lord’s main objective for us is Restoration – Miraculous!

Upon returning home from Hope4Cancer, Aaron’s neuro-oncologist scanned him again and was pleased to see that there was no new growth. The Lord instructed me to ask for a Miracle – we’ve received it, and are still receiving it! I remember standing in the hospital hallway with those two doctors in white coats, thinking, “Aaron is 40, the love of my life, the father of my children. I don’t want to extend his life a few more years. I want to extend it a few more decades!”

We have more to go – but with the Lord’s hand, and Hope4Cancer, Aaron has already outlived his first prognosis.

We have been able to dream of the future again. We are no longer afraid of “life-threatening illness” like we once were. We are more in touch with our mortality, our dependence on our Good Father, and we are able to live one day at a time – with light hearts and lots of laughter.

We are learning to see that every moment is a Miracle, and we no longer want to take any of them for granted.

If you or someone you love has been struggling with a cancer diagnosis or is feeling pressured to pursue treatment that doesn’t resonate with you, we want you to know there are other options. Reach out to our admissions department and schedule a free consultation today to learn how we can help.